Strong performances at Kleos Brazilian Jiu-Jitsu competition at the High Wycombe Judo centre – with Ben Gracie picking up a silver medal in a stacked division.

Focussed and ready for his first ever BJJ fight.

Entering his first BJJ competition, Ben (in the white Gi) had a total of four fights, submitting his first two opponents. In his first fight he finished his opponent with a head and arm triangle choke, the second opponent was also choked out and in his third fight he heavily dominated his opponent to win by a very substantial number of points.

Ben was the only competitor to submit his opponents in the early stages of his division..

Ben lost the final after a gritty performance but took home silver in a big division.

Charged up and ready to fight..

Richard Mackie (in the black Gi) also put in a strong performance – winning his first competition fight – in a big division. 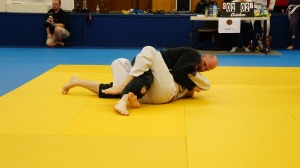 Passing the half guard..

Rich lost his first fight but recovered quickly and with a strong and determined mind, dominated his second opponent to take a points victory.

Richard’s third fight was a stand out fight in the division – truly exciting with both fighters having periods of positional dominance. Rich lost the fight narrowly, on points but put in a very strong performance against a clearly experienced competitor.

If you would like to join a Brazilian Jiu-Jitsu team in Kingston-upon-Thames, join Lifestyle Team. We have big plans for 2016 and beginners are very welcome. 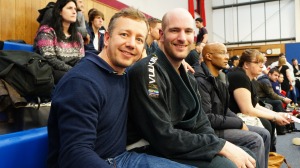 We have upwards of twenty people on the mat during our training sessions making the Lifestyle Team a fantastic place to train with a brilliant atmosphere. There are no egos and everyone is looked after and very welcome.

If you are a beginner and would like to learn the art of Brazilian Jiu-Jitsu – find out how the team runs, costs or our beginner’s program by contacting Diccon: 07974 303 147 or e-mail: bjjlifestyleteam@gmail.com

This site uses Akismet to reduce spam. Learn how your comment data is processed.